Last month, I had the very exciting opportunity to help some friends stage their house, in order to get it ready to sell!  I offered to help for free (as long as I could have before and after pictures), since the only other house I’ve ever staged was our own house before we sold it (although it did go under contract less than 2 days after it went on the market!).  There was really nothing to lose for our friends (free advice – that they could take or leave?!) or me (a chance to play house stager?!), so here’s how it all went down…

First, I stopped by to do a walk through to recommend the DIY projects they should do before we re-arrange furniture or stage, to include what things to pack up in a storage unit (they rented a POD that they parked in their driveway).  The home owners did an AMAZING job prepping and doing items I suggested for homework!  They started by packing up a large amount of furniture and belongings to put into storage, painted several rooms (even power-washed and re-painted the deck), changed out some faucets, bought new shower curtains, new towels, new linens and pillows!  They also did a crazy amount of cleaning and refreshed the tile grout in their kitchen (I’d say that’s some major commitment)!

I think these are universal tips for staging a house to sell (they’re also what we followed when staging our own house):

Here are some before and after pictures to give you an idea, although unfortunately, most of the “before” pictures were taken after packing work had begun – so the rooms are crazier than they typically were in the “before” state…

Let’s start with the first room you see when walking into the house, the living room:

Living Room Before (you have to envision without the boxes): 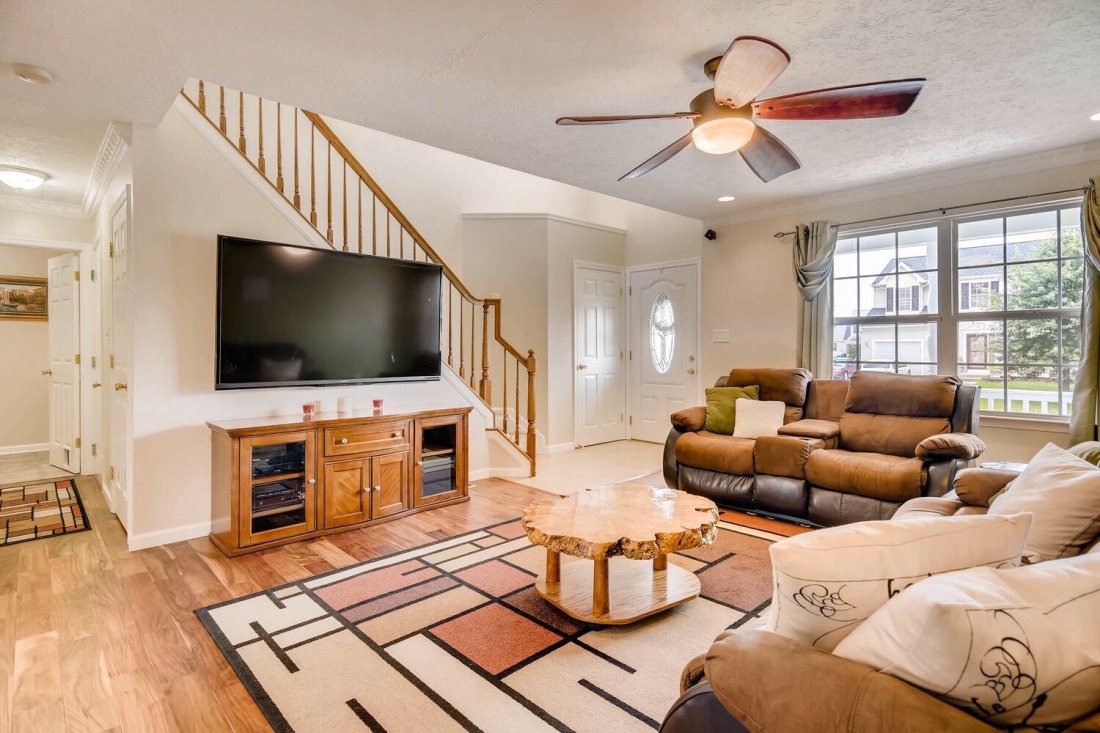 For this room, they removed the corner section of their couch, and removed a chair (not pictured in the before pic), the cat walk, and the baby toys. I tried to soften the dark brown couch with some cream colored pillows (which got jostled a bit, but who’s looking at tiny details like that?! Speaking of, I had widened the curtains to take up more wall space, but those got “re-squished”. Not like anyone but me is noticing those crazy details… hahaha). 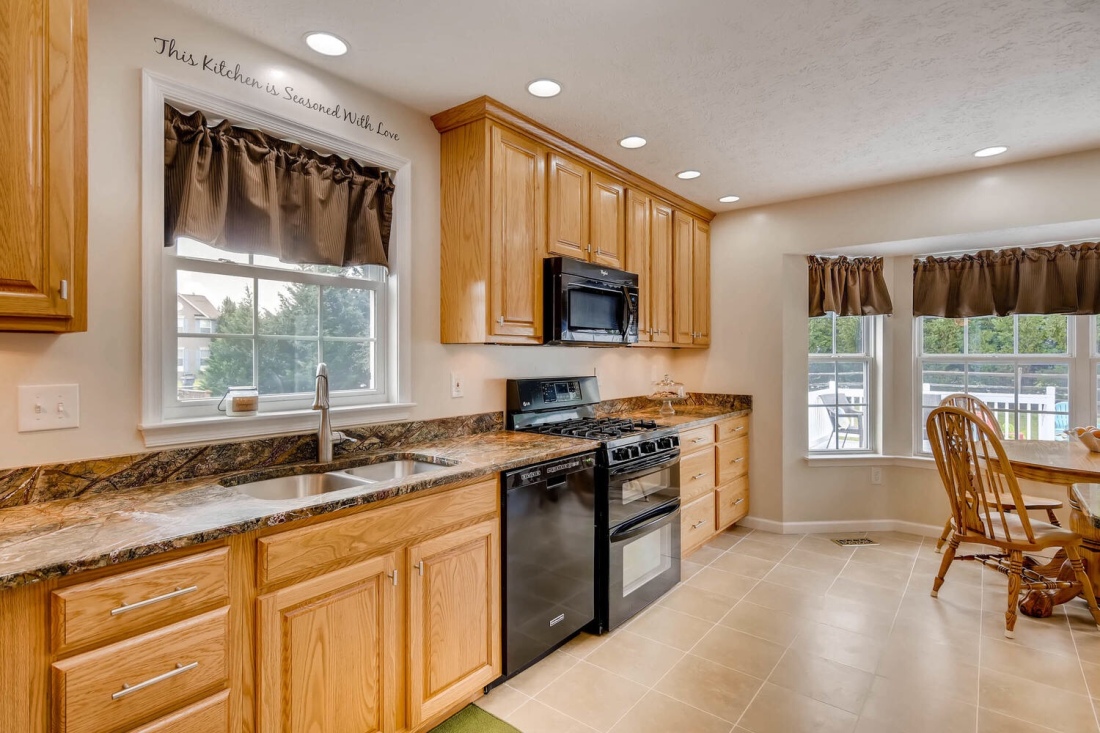 Notice how the home owners refreshed the grout?! Amazing difference! They started using one of the grout, paint pen products, but quickly learned it was faster and easier to do a “skim coat” of new grout on top of the old layer. The home owners are extremely adept at DIY projects, so someone else might feel differently? The kitchen was just about clearing off the counters, and leaving a few things out for decor (some flowers, some cookies, some clementines on the table, and a candle on the windowsill). 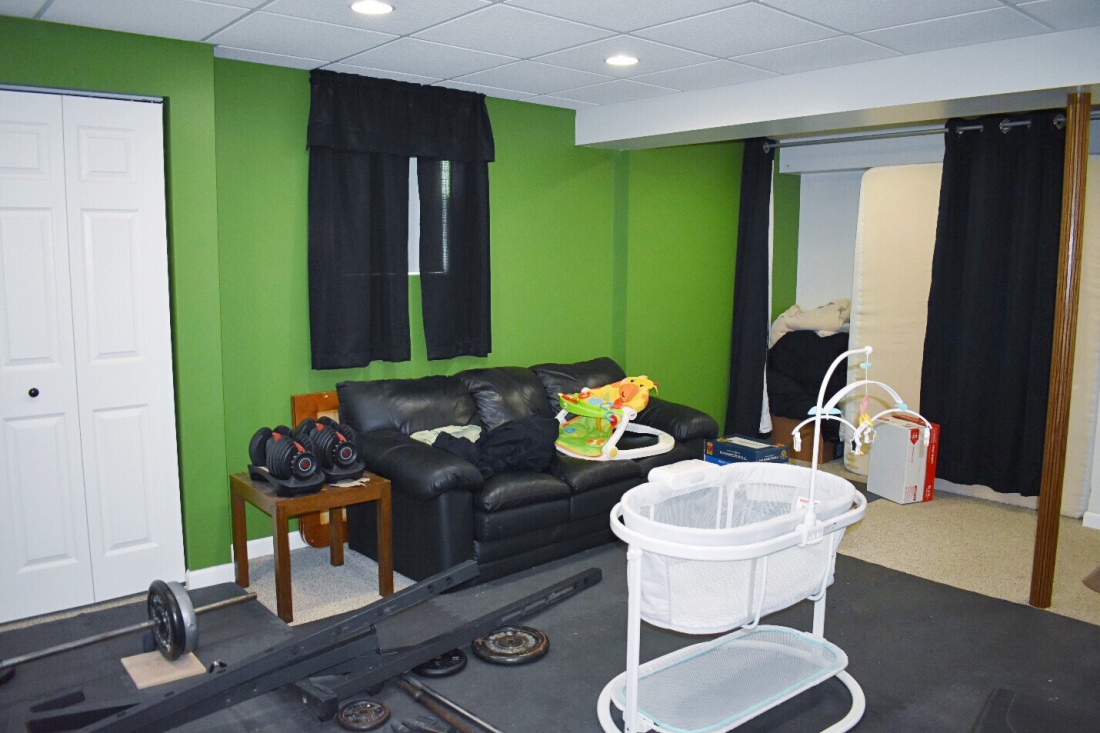 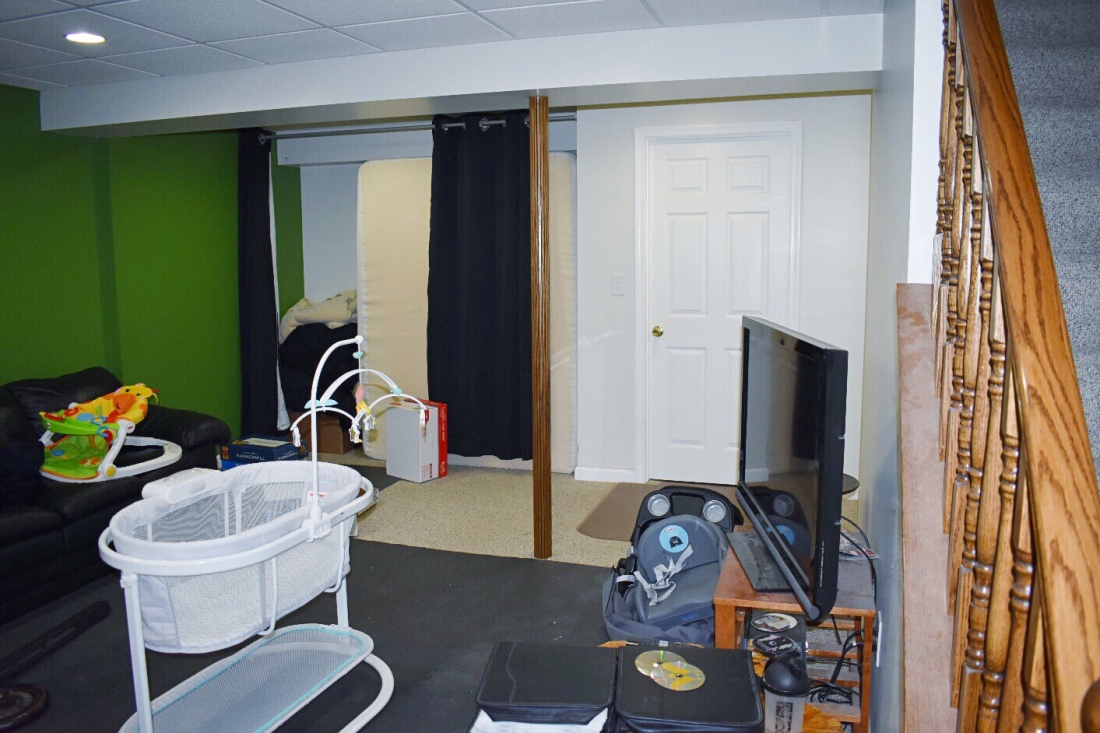 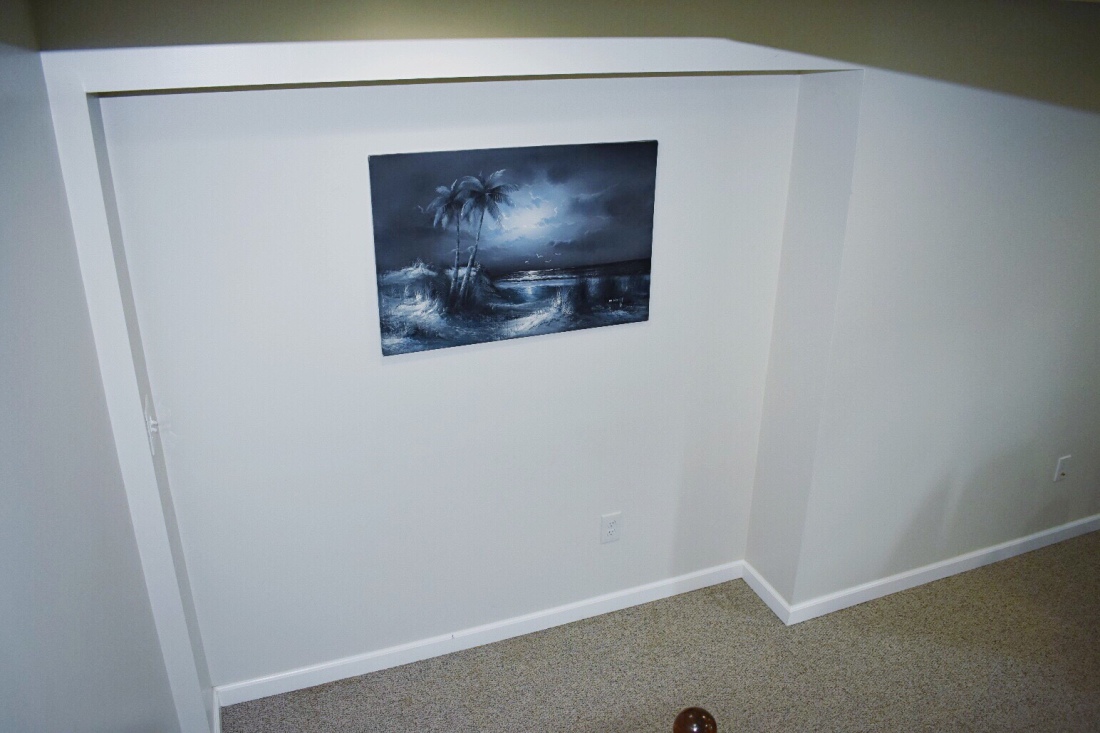 This room was so simple, but I think it was probably the most dramatic transformation. The home owners repainted the bold, green wall a neutral gray, and replaced the dark curtains with light gray curtains. I stole the armchair and coffee table from the living room, and the TV console table from a closet. The dresser was at the bottom of the basement stairs, and a painting was moved to that wall instead. I used some light wood side tables & matching driftwood on the dresser to balance the darker furniture, and some gray blankets and pillows to help soften it, too. Also, I used some metal lamps on the dresser that felt less top heavy. Everything the home owners removed from this space (to include the bold wall color), made ALL the difference in here! I also think the blankets and pillows helped to tone down the dark furniture.

While a cabinet might seem so functional in a bathroom, all it did in this one was take up visual space. This room was an easy one, and also made for another big transformation, thanks to the power of paint and removing furniture!

This room was just about decluttering, so it appears more spacious. I loved the colors and decor in this room – so cute (especially love that rug)! 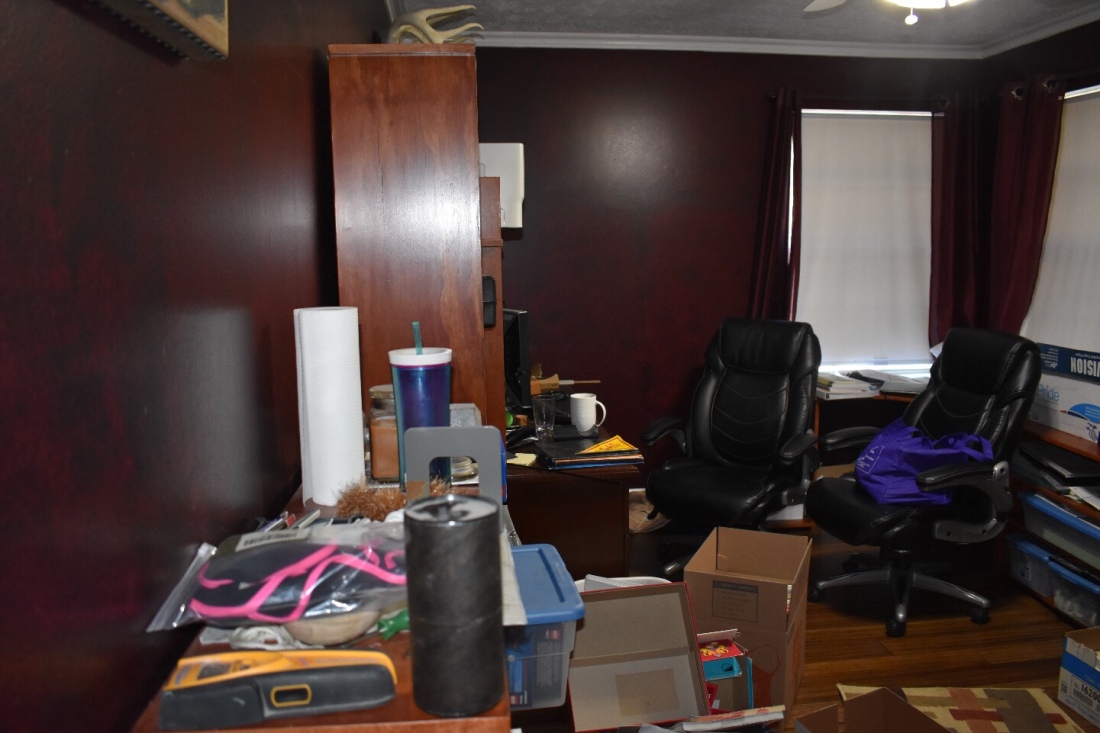 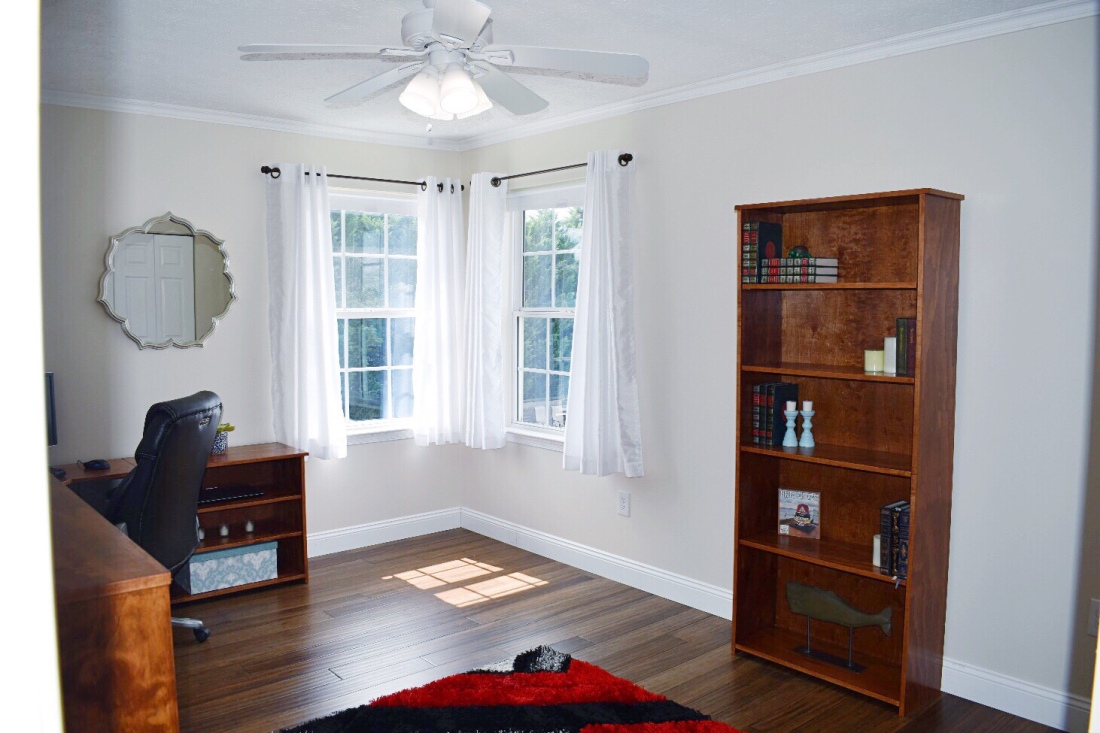 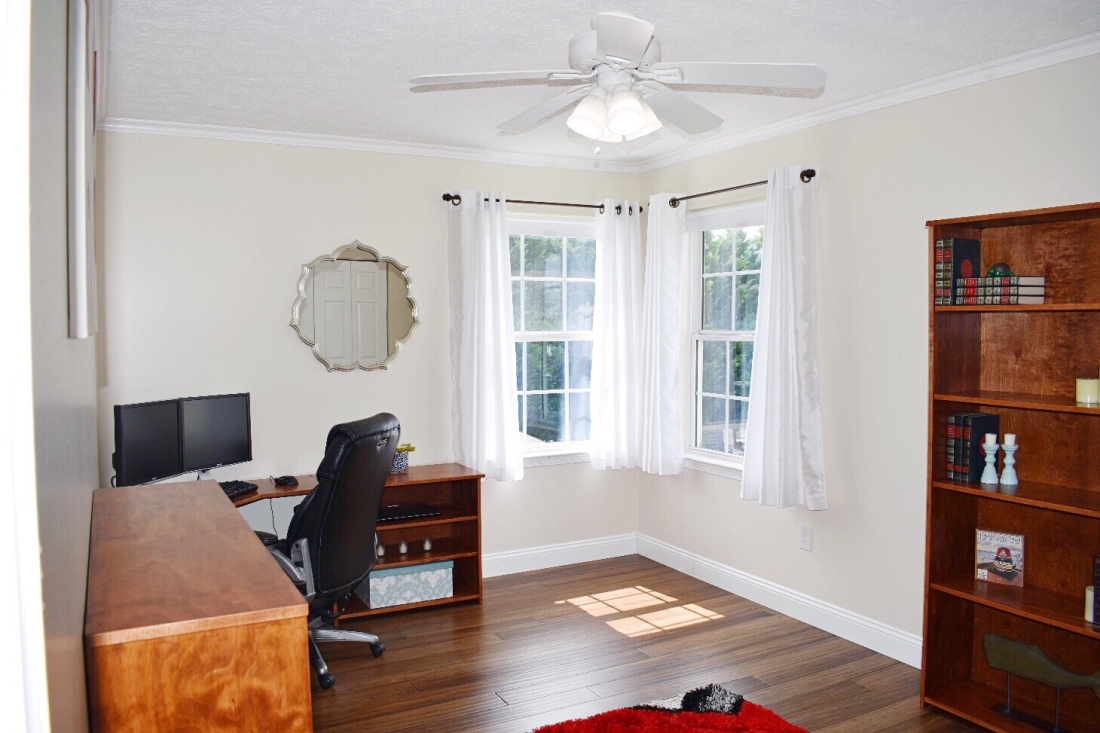 Another huge difference thanks to paint and decluttering! Originally there were 2 desks in here (can you see the corner desk under the windows in the “before” pic?). And a lot of bookshelves. A lot. With lots of boxes (obviously, the boxes were usually on the shelves instead of the floor – but still – lots of boxes!). The home owners did a great job picking fresh, white curtains for this room! (When in doubt, I think you can always go white with curtains when staging). Also, note how sparsely decorated the shelves are? I think less is more when staging (although to be honest, I was using my stuff for most of the bookshelf decor, so I had to spread it thin so it would go further, too, haha).

I suggested painting this room so it was all one color (preferably the green), but I actually think it worked fine leaving it as-is. Once they moved the bed so it wasn’t under the window, I could create the feel/illusion of a headboard with pillows, and the room made sense. I think a bed can work under a window, but not without a headboard. 🙂 I also had them remove the end table and move the bookcase (can you spot their kitty that was helping me stage the bookcase?! ☺️).

Can you believe the home owners did that tile work themselves?! This room was by far the easiest – I just had them get a white shower curtain and white towels. I wanted to highlight the tile, and I felt like the original curtain distracted too much from it.

Master Bedroom Before (imagine without the ladder, changing table pad, and roll of orange bubblewrap): 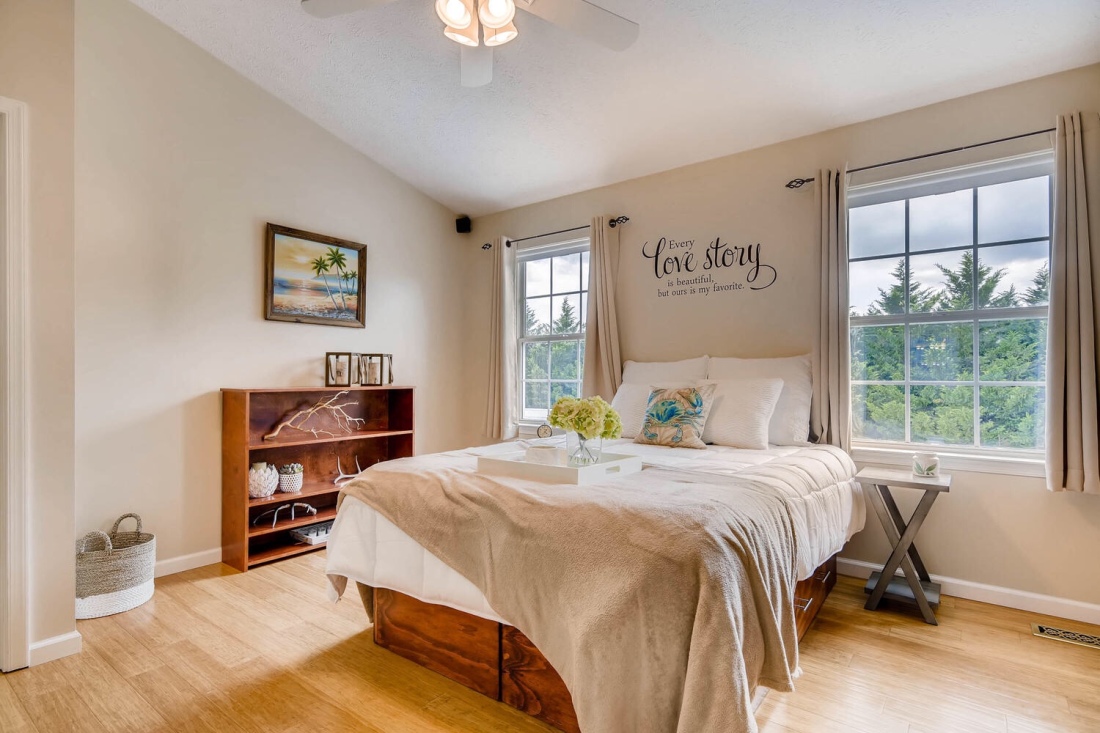 For this room, I created another faux-headboard with pillows, and the home owners bought a nice, white duvet and a decorative pillow. They also got lighter curtains, which blended great with the tan walls. I used the tan blanket to tie together the curtains and decorative pillow. We also stole some art from the guest bedroom (it originally had four beach paintings, plus, there was one in the basement – I think spreading them out a bit, in rooms with similar color schemes to the paintings, helped give a cohesive feel to the house). I also added small side tables because this room is HUGE and felt off without them. These were the only tables I had on-hand that were tall enough for the bed, but I think they work well! 😊 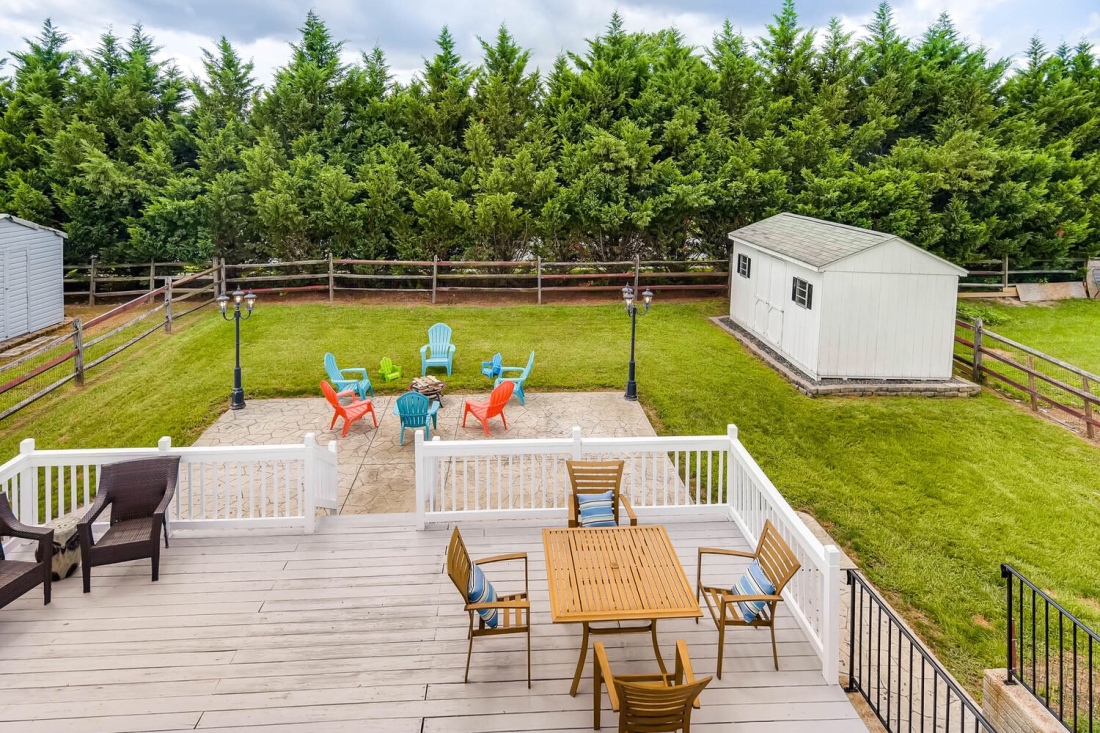 We created three defined “zones” outside with furniture, but the home owners killed it with the power-washing and re-painting the deck!!

So what was the result of all this hard work?! Well the home owners got an offer (which they countered and the buyers accepted) 24 days after listing! Considering they put the house on the market towards the end of summer (and at a list price about $20K higher than the Zillow estimate), I think that’s EXCELLENT!!!

I believe that pricing is a critical factor when selling, and it seems like listing within $5-10K of the comps (especially if just at, or under, the value of comps) is “listing to sell”. But putting in some extra work upfront to make a home feel “turn key” can definitely help to get the right buyer in the door, sooner!

Thanks again to the home owners for letting me play “house stager/ decorator”! I had so much fun!! ☺️

3 thoughts on “Staging a House to Sell…”

Hey there! We’re two sisters (Dee and Nikki) sharing our misadventures in life and home renovation. Dee lives in the midwest in a rancher (soon to be two-story house) and Nikki lives on the east coast in a two-story Dutch colonial. Dee is doing a full house renovation all at once, and Nikki is gradually fixing up her house, one project at a time. We hope you enjoy reading, and thanks for stopping by!

🎶“The waiting is the hardest part.” 🎵
Happy Mother’s Day! 🥰💐
He is Risen! ⛪️🐰
Cheers to that last cup of coffee you have while enjoying your Christmas decorations, before finally taking them down! ☕️🎄Anyone else do this? Feels nice to take a minute & just be grateful for how blessed we were this past season (and year). ☺️✨🙏
Here’s to the only view in my house right now that still looks clean, and for making it to Friday... 🍻🙂 Happy weekend!
Happy Easter!! 🐰⛪️ He is Risen!! 🙌 Hope everyone is having a wonderful family celebration today! Lots of hidden bunnies in this picture... The little girl wasted no time picking her bunny cinnamon roll out... ☺️😆🥰